How new BBQ gas bottle changes will affect you

The following item was authored by Energy Safe Victoria and appears publicly on their website  https://esv.vic.gov.au/. Theirs is the best and easiest to understand explanation of the conversion to the new LCC27 connector we could find on the internet. As far as we know, the change applies to every State and Territory in Australia, but to be sure, you should check with the authority in your own neck of the woods.

Since 1 April 2021 LPG cylinders (also called ‘gas bottles’) with new connectors have been gradually phased in.

When you next exchange cylinders for your BBQ or other outdoor gas appliance, you may receive a cylinder with the new connector.

You won’t need to replace those appliances as the new connector, known as the LCC27, will safely and easily connect to the hose on your existing appliance.

The LCC27 connector is being introduced to improve safety and reduce the risk of BBQ fires and accidental gas leakage from LPG cylinders.

Cylinders with the current connectors – Type 21 (POL) – may continue to be used. These valves will be phased out over a ten-year period as each LPG cylinder is due for a retest or ten-year changeover.

From 1 October 2021, BBQs and gas appliances with new hose fittings, designed especially for the new connector, will also be phased in. A timeline of these changes is shown below.

For more information, check these links:

The new LCC27 connector is safer

From 1 October 2021 BBQs and other appliances with new connectors were being phased in.

But from 1 April 2022, the new connectors will be mandatory on all new BBQs, patio heaters, and other outdoor LPG appliances with a hose assembly manufactured after this date.  Refer to the transition timeline below.

The new LCC27 hose connector (refer to the image below) has been designed specifically for the LCC27 valve and contains the thermal cut-out feature to stop gas from flowing if there is a fire.

The new appliance connector attaches to the new valve using the outside thread, rather than the inside. It is easier to attach due to the large plastic nut and is screwed on in a clockwise direction.

If you have a new BBQ or appliance with the new connector, you must not use an adaptor to connect to the old Type 21 or POL cylinder connection.

Connecting your BBQ or patio heater

Your current BBQ will connect to the new LCC27 connector.

The new LCC27 connector looks different from the current POL valve (refer to the image below). It has both an inside and outside thread, ensuring it is compatible with all existing and future BBQ and LPG appliance connections.  You do not need to buy a new BBQ or patio heater to use the new LPG valve,

To connect to your current LPG appliance, simply screw your BBQ or gas appliance hose end into the inside threaded opening of the valve in an anti-clockwise direction, until a tight connection has been made. 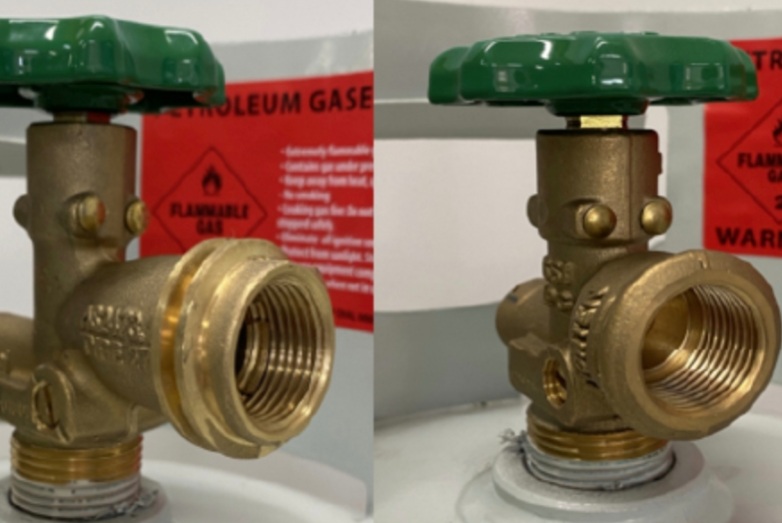 “We have a new smartphone and now know how to add a shortcut which loads your website in seconds. We love the website and rely on it full time”